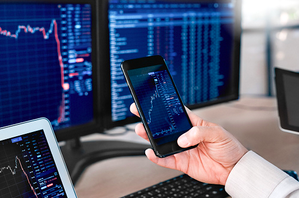 The word “jouncy” may have started life as a combination of bouncy and jolting – and it’s a pretty good way to describe what happened to stock markets last week.

The week started with the Standard & Poor’s 500 Index experiencing daily gains and losses of about one percent. Other major U.S. indices saw sizeable daily swings in value, too. Lu Wang of Bloomberg reported:

“The harrowing reversals reflect a particularly stark divide between bull and bear cases in markets right now. On one side, risk appetites are being constricted by lingering uncertainty over the government debt ceiling, tightening Federal Reserve policy and disrupted supply chains. At the same time, sentiment is being buttressed by improving [COVID-19] trends, an economy that keeps chugging along and forecasts for more double-digit earnings growth from corporate America.”

Considering how volatile things were early in the week, investors were remarkably sanguine about Friday’s less-than-stellar employment report. The Bureau of Labor Statistics indicated that less than 200,000 jobs were created in September.3 According to Ben Levisohn of Barron’s, the number was below expectations and provided relatively little insight to economic growth.

“Yes, the U.S. added just 194,000 jobs in September, well below forecasts for 500,000, and that’s the kind of miss that would suggest a slowing economy. The number, though, was close to meaningless, given the seasonal adjustments – which may have skewed it lower – and by comparison to the household survey, which showed more than 500,000 new jobs as the unemployment rate fell to 4.8%. Try making an investment decision off that.”

Consumers, investors, and central bankers are also expending a lot of energy worrying about power – the kind that’s generated by natural gas, oil, coal, wind, sun and other sources. Supply and demand issues in energy markets have caused prices to rise and is pushing inflation higher, according to Julia Horowitz of CNN Business.

Major U.S. indices finished the week higher, although the Nasdaq Composite’s gain was just 0.1 percent. The yield on a 10-year U.S. Treasury rose to 1.6 percent.

Currently, there is a mismatch in energy supply and energy demand in many parts of the world. In some places, it is creating issues that countries haven’t experienced in some time. For instance:

-In Europe, the cost to heat the average home rose about fivefold from September 2020 to September 2021, according to The Economist.

-In India, where about 70 percent of electricity is generated by burning coal, coal supplies are running low, according to Arunoday Mukharji of BBC.

-In China, rolling blackouts have implemented to address an electricity shortage, reported Peter Hoskins of BBC.

-In Lebanon, power plants went offline over the weekend and the country is expected to be without power for several days, reported Laila Bassam of Reuters.

-In the U.S., oil prices are at a seven-year high, and the price of gasoline was above $3 a gallon. In some places, it was above $5 a gallon, reported Pippa Stevens of CNBC.

There are many reasons for the current energy shortage, reported Will Englund of The Washington Post. “The economic recovery from the pandemic recession lies behind the crisis, coming after a year of retrenchment in coal, oil and gas extraction. Other factors include an unusually cold winter in Europe that drained reserves, a series of hurricanes that forced shutdowns of Gulf oil refineries, a turn for the worse in relations between China and Australia that led Beijing to stop importing coal from Down Under, and a protracted calm spell over the North Sea that has sharply curtailed the output of electricity-generating wind turbines.”

The energy shortage may be more challenging to overcome than some other types of shortages, opined The Economist, because investment in fossil fuels has been declining as the world moves toward lower emissions and greener energy sources. “The long-term challenge is to smooth out volatility as the switch to renewables continues.”

Investment advisory services offered through Keystone Financial Services, an SEC Registered Investment Advisor. These views are those of Carson Coaching, not the presenting Representative, the Representative’s Broker/Dealer, or Registered Investment Advisor, and should not be construed as investment advice. This newsletter was prepared by Carson Coaching. Carson Coaching is not affiliated with the named firm or broker/dealer. Government bonds and Treasury Bills are guaranteed by the U.S. government as to the timely payment of principal and interest and, if held to maturity, offer a fixed rate of return and fixed principal value.  However, the value of fund shares is not guaranteed and will fluctuate. Corporate bonds are considered higher risk than government bonds but normally offer a higher yield and are subject to market, interest rate and credit risk as well as additional risks based on the quality of issuer coupon rate, price, yield, maturity, and redemption features. The Standard & Poor’s 500 (S&P 500) is an unmanaged group of securities considered to be representative of the stock market in general. You cannot invest directly in this index. All indexes referenced are unmanaged. The volatility of indexes could be materially different from that of a client’s portfolio. Unmanaged index returns do not reflect fees, expenses, or sales charges. Index performance is not indicative of the performance of any investment. You cannot invest directly in an index. The Dow Jones Global ex-U.S. Index covers approximately 95% of the market capitalization of the 45 developed and emerging countries included in the Index. The 10-year Treasury Note represents debt owed by the United States Treasury to the public. Since the U.S. Government is seen as a risk-free borrower, investors use the 10-year Treasury Note as a benchmark for the long-term bond market. Gold represents the 3:00 p.m. (London time) gold price as reported by the London Bullion Market Association and is expressed in U.S. Dollars per fine troy ounce. The source for gold data is Federal Reserve Bank of St. Louis (FRED), https://fred.stlouisfed.org/series/GOLDPMGBD228NLBM. The Bloomberg Commodity Index is designed to be a highly liquid and diversified benchmark for the commodity futures market. The Index is composed of futures contracts on 19 physical commodities and was launched on July 14, 1998. The DJ Equity All REIT Total Return Index measures the total return performance of the equity subcategory of the Real Estate Investment Trust (REIT) industry as calculated by Dow Jones. The Dow Jones Industrial Average (DJIA), commonly known as “The Dow,” is an index representing 30 stock of companies maintained and reviewed by the editors of The Wall Street Journal. The NASDAQ Composite is an unmanaged index of securities traded on the NASDAQ system. International investing involves special risks such as currency fluctuation and political instability and may not be suitable for all investors. These risks are often heightened for investments in emerging markets. Yahoo! Finance is the source for any reference to the performance of an index between two specific periods. The risk of loss in trading commodities and futures can be substantial. You should therefore carefully consider whether such trading is suitable for you in light of your financial condition. The high degree of leverage is often obtainable in commodity trading and can work against you as well as for you. The use of leverage can lead to large losses as well as gains. Opinions expressed are subject to change without notice and are not intended as investment advice or to predict future performance. Economic forecasts set forth may not develop as predicted and there can be no guarantee that strategies promoted will be successful. Past performance does not guarantee future results. Investing involves risk, including loss of principal.
* The foregoing information has been obtained from sources considered to be reliable, but we do not guarantee it is accurate or complete. There is no guarantee a diversified portfolio will enhance overall returns or outperform a non-diversified portfolio. Diversification does not protect against market risk. Asset allocation does not ensure a profit or protect against a loss. Consult your financial professional before making any investment decision. Please contact our office if you would like a list of sources used in creating this content.